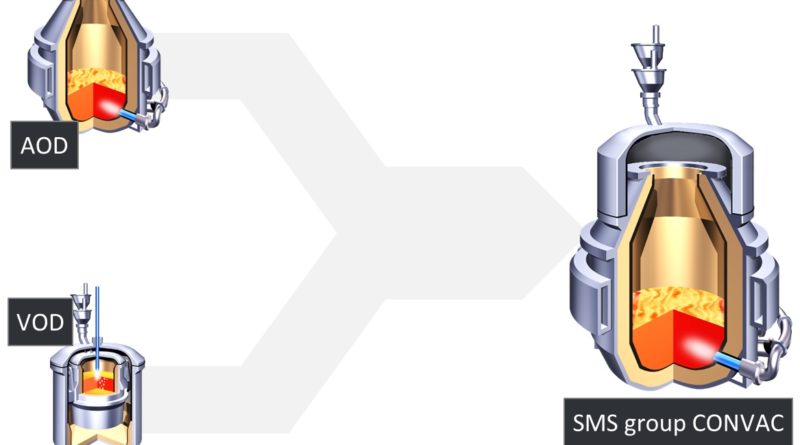 In the scrap-based stainless steelmaking, electric arc furnace (EAF) is used to melt the scrap, after which the molten metal is further processed in AOD, VOD and/or various ladle treatments depending on the requirements set by the product. In other words the melting of the material and the metallurgical processing (i.e. mainly decarburization) are separated from one another into two independent processes.

The AOD (or VOD) is followed by e.g. ladle treatments, continuous casting, slab grinding, hot and cold rolling as well as pickling and annealing. However, these processes are omitted in this study, since the focus is on the refining processes preceding these operations.

Ferrochrome converter is a link between the production of ferrochrome and stainless steel production. Its purpose is to enable the transfer of ferrochrome in a molten state from the ferrochrome plant to the stainless steel melting shop and to enable the utilisation of ferrochrome’s chemical energy for scrap melting. During the CRK process oxygen is blown into the metal, due to which the silicon content of the metal is decreased from 4 to 5 w-% to less than 0.5 w-%. At the same time, the carbon content is decreased from approximately 7 w-% to approximately 3 w-%. Further decarburization would lead into excessive oxidation of chromium. Exothermic oxidation reactions of silicon and carbon release energy that is used to heat the metal and to melt scrap and slag formers. Although the purpose of CRK is different to more commonly used AOD converter, these two converters are geometrically very similar to each other with almost identical shape and both having sidewall tuyeres in addition to the top lance.

AOD process produces most of the world’s stainless steel

Argon Oxygen Decarburization is the process in which most of the world’s stainless steel is being produced. Its purpose is to remove carbon – as well as silicon if CRK is not used – without excessive oxidation of chromium from the metal that consists of ferrochrome and molten scrap.

Other important features concerning the AOD are nitrogen control and sulphur removal, latter of which is usually executed as a separate stage at the end of the processing. In order to control the process it is important to know how to influence oxidation reactions and how to control the nitrogen content with accessible process variables. The variables by which the AOD is usually being optimized are the blowing ratios between top and bottom blowing, lance positions and oxygen/nitrogen/argon -ratios in the gas during the different stages of the blowing as well as the durations of stages themselves. Furthermore, it is possible to control the process via additions of scrap, lime and alloying elements.

Since the carbon is removed much more efficiently when compared to CRK, a reduction stage in which the oxidized chromium is reduced is needed after the decarburization at the end of the processing.

Due to similarities with the CRK process presented above, it is unnecessary to repeat certain things that are already covered in the previous section.