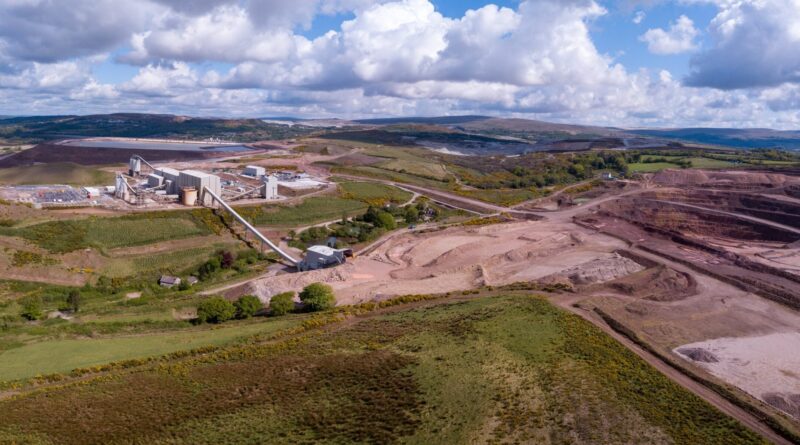 Following a three-month review, Tungsten West has announced an updated development plan for its Hemerdon tungsten-tin project in Devon, UK.
Tungsten West acquired the Hemerdon project out of receivership in late 2019. Previous owners Wolf Minerals failed to properly identify the main tungsten mineral in the deposit, leading to significant processing challenges and poor recoveries. In March 2021, Tungsten West produced a Bankable Feasibility Study (BFS) for Hemerdon. Part of Tungsten West’s plan to turn the mine into a profitable business was shifting the processing plant to focus on the correct mineral.
However, the company was forced to pause development after rising energy prices and inflation challenged the finances of the project – the original capital expenditure (CAPEX) forecast in the BFS – some £35 million – had already risen to £54 million. New CEO Mark Thompson commented “I am very glad that we were able to pause development of the Hemerdon Project when we did. Our new plan reduces capital expenditure, lowers the ongoing operating costs by streamlining processes for greater energy efficiency, and maximises operating margins”.
Changes to the processing circuit at Hemerdon form the core of the revised development plan.
Rather than restoring the existing primary and secondary crushing buildings, Tungsten West now plans to install a semi-mobile crushing circuit. The new crushing circuit is less capital intensive, but will also reduce operating expenses (OPEX) by preventing double handling of ore on the run-of-mine pad. Crushed material will then be sent to four ore sorters, rather than seven, significantly reducing CAPEX. These ore sorters will be run at a lower accept rate (9% rather than 30%), reducing tungsten recovery, but only allowing higher grade material through to the processing plant. The lower volume of high grade ore significantly reduces OPEX.
With lower volumes entering the processing plant, Tungsten West have been able to repurpose existing equipment at lower cost. The company has also removed the tungsten reduction kiln from the plant. Although this will result in a slightly lower grade tungsten concentrate (45% vs 52% previously), increased recoveries during dense media separation (due to higher ore grades), no losses in the reduction kiln, and lower OPEX, means that this is offset.
Overall, the changes made to the entire processing circuit are forecast to reduce energy consumption by around 30%, significantly reducing operating costs. The new plan reportedly puts CAPEX between £26-36 million, in line or below the initial BFS estimates.
Alongside these changes, Tungsten West also plans to ramp up Hemerdon over three years, rather than two. This will mean that the mine produces a combined 1,350 tonnes of tin-in-concentrate over the three years, rather than roughly 1,630 tonnes.
Inflationary pressures have challenged junior and established miners alike over the last year, pushing up operating costs and investment CAPEX. Reduction to OPEX and CAPEX at Hemerdon appear to have come more at the expense of tungsten production, rather than tin. This will change life of mine financial metrics, which Tungsten West aims to release as soon as possible. The company remains confident that Hemerdon will still be a profitable venture and is planning for first production during the first half of 2023.