On 14 February 2021, a portion of the high wall at the Ngwarati Mine box cut subsided, fatally injuring an employee of a contractor operating at Zimplats. This resulted in the temporary closure of the Ngwarati Mine, with production teams transferred to Rukodzi, Bimha and Mupani mines and milled volumes supplemented by stockpiled development ore from Mupani Mine.

The redeployed teams ramped-up to full production rates by period end and Ngwarati Mine is expected to return to full production by the end of FY2021. As a result, tonnes mined, milled grade and process recoveries were all negatively affected during the quarter.

Tonnes milled were stable at 1.70 million tonnes, while the delivered mill grade declined by 2%. The ore mix impacted process recoveries and 6E concentrate production fell by 8% to 138 000 ounces. A furnace reline was completed in the period and matte production including concentrate sold to IRS of 137 000 ounces was 10% weaker than in the previous comparable

The impact of challenges experienced at Zimplats in March was mitigated by strong operational delivery prior to the Ngwarati Mine incident. Mill throughput of 5.06 million tonnes declined marginally from 5.08 million tonnes, with grade and 6E concentrate production 1% and 3% weaker at 3.46g/t and 435 000 ounces, respectively. 6E matte production in the nine-month period increased by 1% to 425 000 ounces. 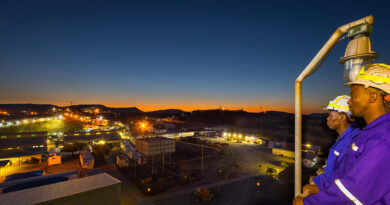 Implats to acquire all of the Royal Bafokeng Platinum

Tharisa: Best quarter on record kicks off a transformative year