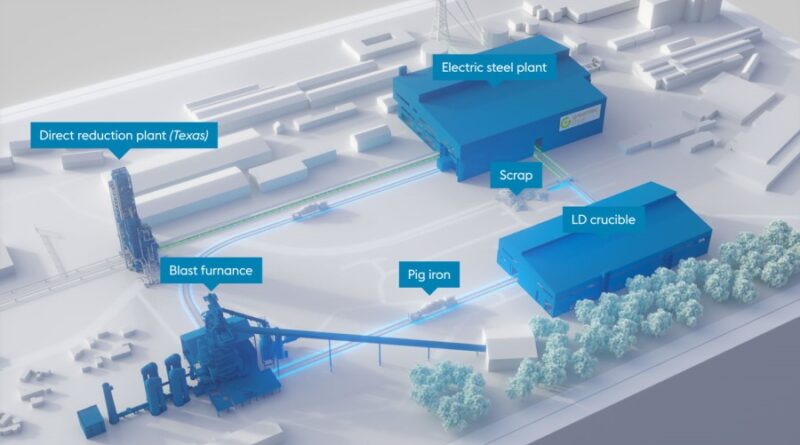 voestalpine plans to gradually shift from the coal-based blast furnace route to steel production using green electricity. Here liquid pig iron and sponge iron (HBI) join scrap as the most important pre-materials for tomorrow’s carbon-neutral production of high-quality steel. The significant innovation in this production technology is the raw materials mix, with its increased proportion of HBI.

The conversion from coal to green electricity is a vital step on the path to climate-neutral steel production. In its hybrid plan voestalpine focuses on a complex of measures which can reduce the Group’s CO2 emissions by around 30% to 2030.

As part of the hybrid plan voestalpine will use electric arc furnaces (EAF) – they will operate parallel to the blast furnace/LD converter route. Operating EAFs using electricity generated by renewables will make a significant contribution to emitting 30 percent less carbon dioxide during steel production by the end of the decade.

Today, voestalpine produces almost all its steel using the blast furnace/LD converter route. Iron ore is used to produce pig iron in the blast furnace, with coke providing the necessary energy and enabling the chemical process; it is impossible to avoid producing carbon dioxide using this technology. The pig iron is then refined in the LD converter: oxygen is blown through and over the pig iron to remove most of its unwanted components. The end product is crude steel.
The second route which will be used in future is based on electricity to melt scrap in an electric arc furnace (EAF). Pig iron and sponge iron can be added to the scrap. Sponge iron is a prematerial for steel production, consisting of directly reduced iron ore with few impurities. It is produced using reformed natural gas.

When voestalpine supplements its crude steel production with the blast furnace/LD converter route with electric arc furnaces, it will use sponge iron as well as scrap. As a result, less pig iron needs to be produced in the blast furnace; this, in turn, reduces both our coke consumption and CO2 emissions in Linz and Donawitz. The hybrid plan allows voestalpine to reduce emissions of this greenhouse gas by 3 to 4 million tons annually—an important milestone on the path to emission-free steel production.

As well as scrap, the high-efficiency electric arc furnace (EAF) melts sponge iron to form crude steel. This offers a significant advantage when it comes to reducing emissions: during the sponge iron production process, a reducing gas consisting of hydrogen and carbon monoxide, reformed from natural gas, reduces the ore to iron—direct reduced iron, or DRI.

As hydrogen binds to the oxygen in the ore to form water, direct reduction releases less CO2 than in the blast furnace route; here this function is assumed by carbon in the form of coke and other carbon carriers which are blown into the furnace (pulverized coal, plastic waste).
Our direct reduction plant in Corpus Christi, Texas, allows voestalpine to produce DRI on an industrial scale. It is then smelted in the electric arc furnaces in Linz and Donawitz in briquetted form—as hot briquetted iron, or HBI. A positive note for the climate.

Three milestones for green steel to drop carbon emissions by 30%