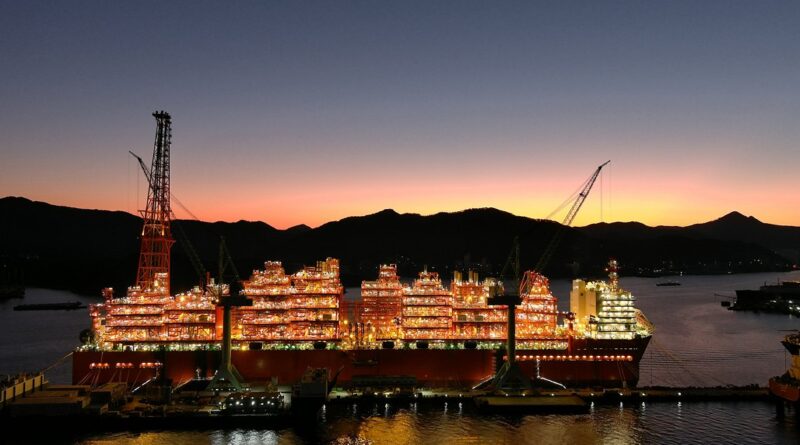 The FLNG will be towed and moored at its operating site in the Rovuma basin offshore Mozambique. Production startup is expected in the second half of 2022, and it will contribute to increase gas availability in a tight market.

Geoje (South Korea) – Eni as Delegated Operator and on behalf of its Area 4 Partners (ExxonMobil, CNPC, GALP, KOGAS and ENH) has held the naming and sail away ceremony of the Coral-Sul FLNG, the first floating LNG facility ever to be deployed in the deep waters of the African continent. The event took place at Samsung Heavy Industries shipyard in Geoje, South Korea, in the presence of H.E. Filipe Jacinto Nyusi, President of the Republic of Mozambique, and H.E. Moon Jae-in, President of the Republic of Korea.

The FLNG, which is part of the Coral South Project, will be now towed and moored at its operating site in the Rovuma basin offshore Mozambique. Production startup is expected in the second half of 2022, and it will contribute to increase gas availability in a tight market.

Coral South Project achieved Final Investment Decision in 2017, only 36 months after the last appraisal well. FLNG fabrication and construction activities started in 2018 and were completed on cost and on time, despite the pandemic. While performing the construction activities in Korea, several significant activities were undertaken in Mozambique, with full support from the Mozambican Authorities, including the ultra-deep water (2000m wd) drilling and completion campaign that involved the highest technological and operational skills and equipment.

The Coral South Project will generate significant Government take for the Country while creating more than 800 new jobs during the operation period.

Stefano Maione, Director Development, Operations & Energy Efficiency at Eni, said: “The Coral Sul FLNG is a world-class feat of engineering, construction know-how and technology, suited to kick-off the development of Mozambique’s world-class resources. The project fits integrally with and within the Eni’s energy transition strategy, as we move towards a decarbonised energy future, in which gas is playing an essential and transitional role”.

Coral-Sul FLNG has implemented an energy optimization approach, integrated in the design via a systematic analysis of energy efficiency improvements. These include among others, zero flaring during normal operations, use of thermal efficient aero-derivative gas turbines for refrigerant compressors and power generation, use of Dry Low NOx technology to reduce NOx emission and waste heat recovery systems for gas processing.

The Coral Sul FLNG is 432 meters long and 66 meters wide, weighs around 220,000 tons and has the capacity to accommodate up to 350 people in its eight-story Living Quarter module. Once the FLNG facility will be in place, the installation campaign will begin, including mooring and hook-up operations at a water-depth of around 2,000 meters by means of 20 mooring lines that totally weight 9,000 tons.

FLNG treatment and liquefaction installation has a gas liquefaction capacity of 3.4 million tons per year (MTPA) and will put in production 450 billion cubic meters of gas from the giant Coral reservoir, located in the offshore Rovuma Basin.

Eni has been present in Mozambique since 2006. Between 2011 and 2014, the company discovered supergiant natural gas resources in the Rovuma basin, in the Coral, Mamba Complex and Agulha reservoirs, holding estimated 2,400 billion cubic metres of gas in place. Eni also holds exploration rights to offshore blocks A5-B, Z5-C and Z5-D in the Angoche and Zambezi basins.

Area 4 is operated by Mozambique Rovuma Venture S.p.A. (MRV), an incorporated joint venture owned by Eni, ExxonMobil and CNPC, which holds a 70 percent interest in the Area 4 exploration and production concession contract. In addition to MRV, Galp, KOGAS and Empresa Nacional de Hidrocarbonetos E.P. each hold a 10 percent interest in Area 4. Eni is the offshore Delegated Operator and is leading the construction and operation of the floating liquefied natural gas facility on behalf of MRV.