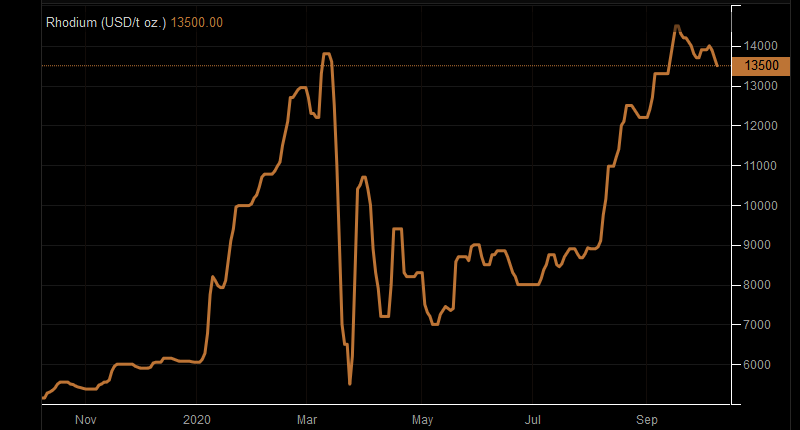 Rhodium has been an investor’s dream over the last nine months. The silvery-white chemical element reached an all-time high of $14,800/oz on 17 September 2020.

Some 80% of the world’s rhodium supply comes from South Africa, which has been a problem. In 2008, supply shortfalls as a result of mining strikes in the country caused rhodium prices to spike to over $10,000 an ounce.

The financial crisis of 2008 eventually caught up with rhodium, and prices collapsed after the South African mines reopened. The price of rhodium recovered a bit following the price collapse, but rhodium is often recycled from old catalytic converters. An increase in recycling beginning in 2008 actually led to an oversupply in the market — eventually pushing prices all the way down to $750 an ounce.

Last year, the rhodium market remained in surplus, but growing demand brought back a supply deficit. The metal started this year close to $6,000/oz and by 12 March 2020 had reached $13,800/oz as lockdowns shut down mines and disrupted supply. Less than two weeks later, the market corrected, and, after more than doubling, the price of Rhodium went negative year-to-date, collapsing to $5,500/oz.

The PGM-metal has, however, recovered all the way back to $14,000/oz in October and is showing no signs of stopping! Rhodium is now roughly 7 times more costly than gold and 15 times costlier than its PGM brother platinum. A kilogram of rhodium (size of a small lemon) is worth a whopping R7 million (US$421,875)!

Will we see further new highs over the coming weeks? There is a problem about the way the rhodium spot price is created. It’s a decentralised market and there is no official reported rhodium price as with gold or oil. Some might even say prices can be easily manipulated.

Rhodium is expected to trade at $12,833/oz by the end of this year, according to Trading Economics global macro models and analysts’ expectations. Looking forward, the analysts estimate it to trade at USD 11,024/oz in 12 months’ time.

Some industry experts see the metal price correcting to around $10,000/oz as supply starts to come back on stream.

Rhodium is the rarest and most valuable of the world’s precious metals. Rhodium is a chemical element with the symbol Rh and atomic number 45. It is a rare, silvery-white, hard, corrosion-resistant, and chemically inert transition metal.

It is a noble metal and a member of the platinum group metals (PGMs). These metals have similar physical and chemical properties and include platinum, palladium, ruthenium, iridium, osmium, and rhodium.

Rhodium is an important industrial metal used in specialty optical instruments, electronics, aircraft turbine engines, and as a jewellery finish. If you’ve ever bought “white gold,” it’s likely you’ve bought rhodium. White gold jewellery is gold jewellery that has been electroplated with rhodium.

The industrial requirement for rhodium has increased dramatically in recent years, as China and Europe switch from diesel to petrol engines. And, as regulation changes, and emission standards tighten, the demand for rhodium keeps rising.

The post-Covod-19 recovery in auto sales is boosting demand, particularly given the lack of alternatives in catalyst chemistry given rhodium’s role in reducing NOx (nitrogen oxide) emissions. In fact, over 80% of all rhodium production will end up in a catalytic converter somewhere. So demand from the automobile industry is critical for rhodium. Thus, unlike gold, this precious metal has a clear increasing industrial demand. On the other side of the equation is the relatively tight supply.

Thing is, rhodium is quite rare. There’s no such thing as a mine that only produces rhodium. Like many other metals, rhodium is produced as a by-product of larger PGM operations. As already mentioned, around 80% of the global rhodium supply comes from South Africa (next comes Russia with about 8%). South African PGM producers extract a mix of metals comprising roughly 60% platinum, 30% palladium and 10% rhodium. The world’s five largest rhodium producers are all listed on the Johannesburg Stock Exchange:

The annual world rhodium is extremely limited, at around 25 to 30 tonnes year (against 2350 tons of gold). Yet, given one of the strictest lockdowns on the planet, unstable and intermittent electricity supply thanks to Eskom and often openly hostile labour negotiations, getting the PGM ounces out of the ground in 2020 has never been more challenging.

There is also a lack of capital expenditure on new rhodium rich (UG2) projects. This will likely see the supply shortages for some time to come.

According to Northam CEO Paul Dunne rhodium may turn out to be the metal of the decade,

He forecasted that because rhodium was in strong demand and short supply, it would continue as the only viable solution for the control of nitrous oxides (NOx). 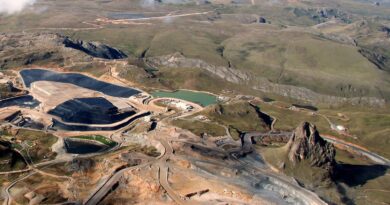