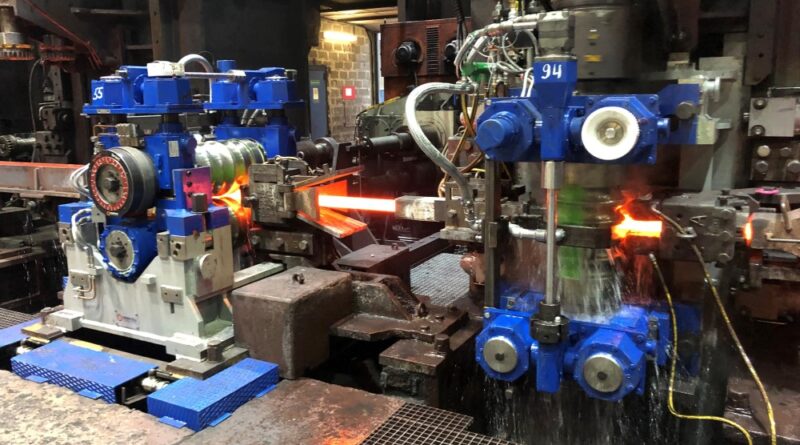 In micro-alloying, the microstructure and texture are influenced by solid dissolution and the reaction of the solid phase, and hence these can be controlled to improve the properties of steel. The criteria for judging a micro-alloy are based on the element state, dissolution, and the quantity dissolved in steel. For metallic materials, solid dissolution means the atoms exist in substrate matrices and there are random defects. For rare earth elements (REE), small quantities dissolve in steel rather than form a solid solution according to the Hume-Rothery principle, and the atomic diameters of REEs are 0.5 times larger than those of iron atoms. The diameters of REEs are altered by polarization between metallic and non-metallic atoms.

For example, when the degree of ionization of a La atom reaches 60 %, the atomic covalent diameter of La is reduced to 1.277 angstroms from 1.877 angstrom, which is 5.5 % times larger than that of an iron atom (1.210 angstroms). The atoms of REE form a substitutional solid solution in the crystal by occupying the lattice section points using a vacancy diffusion mechanism. The tested solubility of REEs in steel is of the order of around 0,000001 ppm to 0.00001 ppm based on the electrolysis of rare earth inclusions and plasma mass spectrometry, using physical and chemical methods and internal friction peaks. Tiny quantities of an REE dissolved in steel can distort the iron crystal lattice and improve the strength of the steel. REEs tend to segregate at grain boundaries and eliminate the local weaknesses due to S and P atoms in steel, improving the strength of grain boundaries and shock resistance.

Solid particles of rare earth compounds act as heterogeneous nucleation sites and can segregate at the interface of crystalline structures, hindering cell growth. Thermodynamic conditions are hence needed to refine the steel grains with the addition of REEs. The effects of adding REEs at various quantities on macroscopic and microscopic crystal structures have been studied. One study has found that the distance between the crystalline structures is decreased considerably and that the solidification of an inter-dendritic liquid film with low melting temperature is promoted with the addition of REEs. The functions of REEs in high S steel, in which rare earth compounds act as the core of non-spontaneous crystallization, are grain refinement and the promotion of the equi-axed grain rate. The effects of REEs on the crystal structure of low S steel are reflected in the thinning space of the dendrite arms. Study also shows that the heterogeneous nucleation sites mainly composed of Ce2O3, which are formed after the addition of REEs in liquid steel due to their high melting point, can have the effects on grain size of ultra-low C (carbon) steel. The yield strength of the steel is considerably improved and the cast grain size is considerably reduced due to the increasing number of nucleation sites of the solid and liquid phases.

Influence of REEs on the microstructures of steel

In plain carbon steel, REE atoms exist in cementite as replacements of iron atoms rather than as carbides. REE atoms tend to segregate at the interface of ferrite and cementite due to their large radius and high aberration energy. Hence, RE atoms are mainly distributed at the interface of cementite alloys and grain boundaries. The grain sizes of austenite decrease considerably with the addition of a greater amount of REEs. The austenite grain size can be controlled to around 10 micrometers when the quantity of REEs is more than 50 ppm. However, the austenite grain size does not change considerably with further increases in the quantity of REE.

Grain boundaries are the preferred nucleation sites for the precipitated phase. The existence of dissolved atoms and the higher rate of atomic diffusion at grain boundaries seen with volume diffusion or lattice diffusion contribute to nucleation and grain growth for the precipitated phase. The segregation, diffusion, and precipitation of REE atoms at grain boundaries can greatly affect the properties of steel. A limited quantity of REEs can improve the preservative ability of steel, while an excess quantity of REEs can deteriorate this. It has been reported that steel with 21 ppm of REEs has the optimal properties of hardness and inclusion modification.

A number of studies have been done to investigate the effects of REEs additions on the degree of impurity segregation to prior austenite grain boundaries and on the severity of temper embrittlement. It is the ability for the REEs to get these impurities as inclusion particles which suggests that REEs additions can be useful from the standpoint of reducing susceptibility of steel to H2 embrittlement. If rare earth additions are used then they eliminate the majority of the segregating and embrittling impurities to reduce the inter-granular fracture when H2 is present in the steel. The importance of the use of the REEs is not that they eliminate H2 embrittlement or even reduce the severity of the H2 embrittlement but that inter-granular fracture seems to be eliminated and this eliminates one weak link in the microstructure. Further, additions of appropriate quantity of REEs like Ce considerably reduce the susceptibility of steel to hydrogen-induced cracking.

In a study in which the effect of misch metal on the behaviour of inclusions in the liquid stainless steel was studied, it has been noticed that during the use of the elements Ce, La, Al, and O2, clogging of the immersion nozzles occurs with oxides of these elements during the continuous casting of steel. There was an increased tendency for large inclusions to form, resulting in clusters when Al was used. While analyzing this theoretically, it was confirmed that the capillary interaction is strongly influenced by the particle shape, size, and surface tension of inclusions in the liquid.

In an another study on nozzle clogging mechanisms during casting of REE treated stainless steels weighing of 350 kg, the experimental results showed differences between fast and slow clogging rates. Steel containing mainly small single inclusions clogged faster than steel containing mainly large inclusion clusters. The reason was believed to be that the small inclusions could stick to the nozzle wall at narrow passages where the steel flow velocity was high, while the larger ones could not. The source of the small inclusions was believed to be reoxidation.

The addition of REEs to steel also affects the corrosion resistance of steel. The REE addition reduces the surface electro-chemical activity and the adsorption tendency of chloride ion on the metal surface. The addition of REEs has a considerable effect on both the meta-stable and stable pitting processes – the dissolution of inclusions induced the electro-chemical activities of pitting corrosion and further inhibits the propagation of local corrosion.

In a study done to know the effect of Ce on the corrosion resistance and mechanical properties of the structural quality steel sheet in a seawater environment (3.5 % sodium chloride solution), Ce was added to the steel during production. The experimental results had shown that the corrosion resistance of the structural quality steel containing cerium was higher compared to that of structural steel, which did not contain Ce. Mechanical properties were also enhanced such as tensile strength increased by 6 %, and yield strength by 8 %. At a Ce content of 0.009 % and at a test temperature of 0 deg C, the notch strength of the steel is increased by 9 %.

The effect of different Ce contents on the micro-structure and morphology of inclusions in structural steel has been studied. A sample with an optimal quantity of 0.0235 % Ce and an S/O2 ratio of around 7 contained predominantly cerium oxides, oxy-sulphides, and only a small amount of sulphides. By increasing the quantity of cerium and decreasing the S/O2 ratio, an increased quantity of oxy-sulphide inclusions was noticed. Inclusions of 4 micrometers to 7 micrometers in size served as heterogeneous nucleation sites for intra-granular acicular ferrite formation.